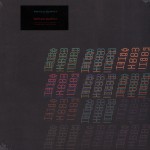 Portico Quartet are a band from London. Their sound is made partially distinctive by the use of the Hang, a 21st century percussion instrument. The group is composed of Jack Wyllie (soprano and tenor saxophone), Duncan Bellamy (drums), Milo Fitzpatrick (double bass), and Keir Vine (Hang and percussion). Nick Mulvey, former Hang player and percussionist, left in early 2011 to pursue his career as singer-songwriter. He is replaced by Keir Vine.

After nearly two years of playing mainly small gigs and busking regularly outside the National Theatre in London, they signed to Babel Label in 2007. Their first album, Knee-deep in the North Sea was released on 5 November 2007. They are now signed to Real World Records. The name portico comes from when one of their gigs was rained off in Italy, and they ended up playing under a portico.

Their third, most recent, eponymously titled album was released on January 30, 2012.