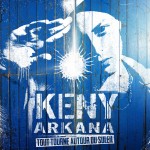 Keny Arkana is an Argentinian-French rapper who is active in the alter-globalization and civil disobedience movements. In 2004 she founded a music collective called La Rage du Peuple, in the neighborhood of Noailles in Marseille. She began writing songs the age of 12, and began rapping publicly about two years later. She later founded a hip hop music group called Mars Patrie, followed by another called Etat-Major. Her status in the French hip hop circles of Marseille rose, and in 2003 Etat-Major released their debut mixtape.